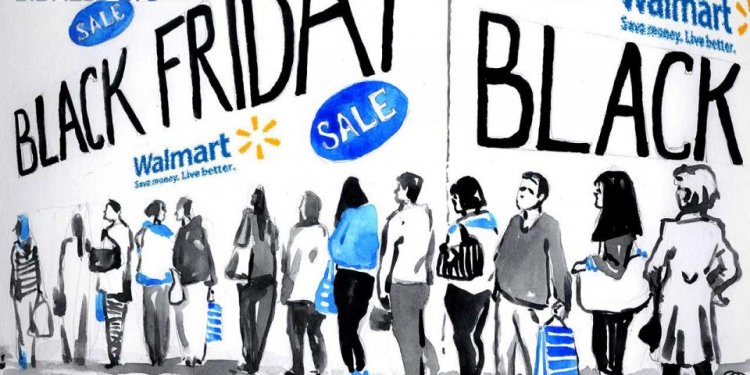 With a string of retailers pushing their sales ever earlier on Thanksgiving Day, Wal-Mart is shifting gears this year by extending its Black Friday discounts through the entire weekend.

Still, that's not to say the retailer will miss out on the Thanksgiving buzz. Wal-Mart will once again kick off its Black Friday deals at 6 p.m. Thursday, in line with competitors such as Target and Sears, and one hour later than Best Buy, Toys R Us and J.C. Penney.

"Black Friday is no longer about waking up at the crack of dawn to stand in long lines, " said Duncan Mac Naughton, chief merchandising officer at Walmart U.S. "It's become a family shopping tradition where everyone shops at some point throughout the weekend."

Shoppers consider televisions at a Walmart in Los Angeles on Black Friday.

On Thanksgiving Thursday, Wal-Mart will kick off its sales event with discounts across a number of categories, including toys, DVD and Blu-ray movie, and kitchen appliances. Sample deals from this group include an Elsa doll from "Frozen, " which will sell for $28.88 and 800 DVD and Blu-ray movie titles that will sell for between $1.96 and $9.96. Two hours later, it will offer markdowns across electronics such as a Beats by Dr. Dre portable speakers, for $99.95, or a $100 savings.

Wal-Mart will then give shoppers 30 percent off on entire categories from 6 a.m. to noon Friday through Sunday, and hold additional sales on categories such as mobile phones and diamonds also on those days. More sales follow on Cyber Monday.

Some retailers, including Wal-Mart, Amazon and Target, have already kicked off Black Friday sales in some capacity. Like Wal-Mart, Target will also extend certain Black Friday deals through Saturday.

"You've seen a number of retailers pull forward their events … and you're seeing a lot of activity, which tells me [this holiday is] going to be very competitive, " Mac Naughton said.