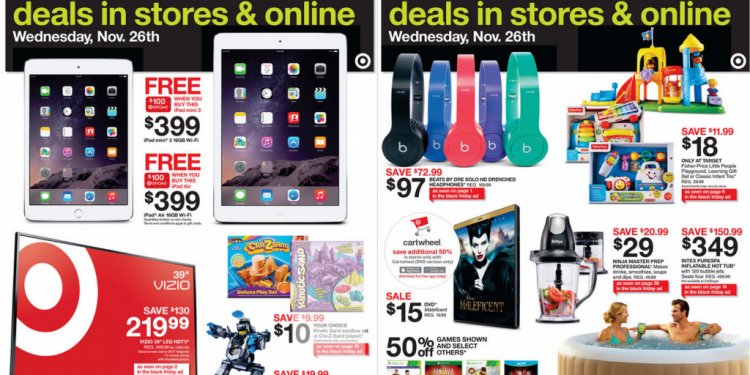 Black Friday 2014 ads from big retailers Best Buy and Target have leaked (well, the retailers have pretty much revealed them), and it looks like you can save on Apple products including iPads and the iPhone 6.

Best Buy will offer its deals online on Thanksgiving Day, Thursday, Nov. 27, as well as on Friday. In-store purchases can be made after 5pm Thursday and starting at 8am on Friday.

Best Buy isn't all about Apple of course. Among the Android deals is a $1 Samsung Galaxy S5 with a 2-year activation. The phone regularly costs $200 with the 2-year contract.

As for Target, it's bundling its own gift cards in an attempt to move various Apple devices. For example:

Target allows online shopping on Thanksgiving Day and opens its stores at 6pm that night. One-day deals will be available on Nov. 10, and another pre-sale will take place on Nov. 26, the day before Thanksgiving. Target is also pushing use of its Cartwheel mobile app for additional savings. So yeah, they want you to buy stuff.